This article has now been superseded. Please click here for the updated wheel and tyre article.

When preparing a vehicle for touring, the choice of wheels and (especially) tyres forms an important part of the vehicle's overall ability to handle the conditions reliably and safely.

You may think (compared to a 4WD built for hard core weekend work), that a touring vehicle is pretty easy on its wheels and tyres. But nothing could be further from the truth. Few vehicles impose such heavy loads on their wheels and tyres as tourers. What's more, they often carry those high loads for long periods at high speed, through very rough and variable conditions, putting huge demands on the strength and durability of their wheels and tyres. 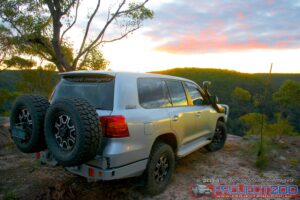 The original equipment wheels fitted to the GXL aren't too bad. They're strong enough, and the 17x8" size is appropriate and allows for a wide range of tyre choices. I can take or leave the design, but that comes down to personal preference. The main problem in my case was that I needed three more, allowing for an additional spare plus two for the camper-trailer. Toyota charge a ridiculous $800 each for these wheels (and they even fetch ~$500 each used), meaning it's cheaper to buy a full set of eight replacement wheels that buy three extras from Toyota! As a bonus, you then have the option of selling the five OE wheels, or keeping them if you'd like to have a second set of tyres.

I had never imagined it would be so difficult to find suitable, legal wheels for a vehicle as popular as the LandCruiser 200, but difficult it was. It seemed that almost every wheel being sold for the 200 wasn't really suitable once the specs were investigated. Aesthetics aside, there are a couple of very important considerations when selecting wheels for the 200.

The 200 is a heavy vehicle, and once you add the rigours of outback travel, it's extremely important to select wheels which provide an adequate load rating. Watch out for the raft of Chinese imports on the market which rarely provide a wheel load rating, and even if they do, it's a dubious one. Many of these wheels are direct copies of the factory wheels, but don't be fooled. There are huge variations in aluminium wheel strength and quality, and appearance is not an indication. Do not assume that a wheel has an adequate load rating simply because it's sold for a heavy 4WD like a Land Cruiser.

The standard 200 series wheel offset is +60mm, but there are many wheels on the market (being sold as suitable for the 200-series) with offsets as low as +30mm or even zero. Not only can such wheels get your vehicle defected in most Australian states, but they could also affect legal liability and insurance in the case of failure. Low offsets put substantially more load on wheel bearings and other suspension components, leading to premature wear and potential catastrophic failure.

After looking through all the available wheels for the 200, I've gone with the new 17x8" Octagon wheel from ROH. It's is an 8-spoke, black and silver design (they also do a full-black version), with a 1250kg load rating. The +47mm offset helps fill the guards out slightly without adding too much load to the bearings and axles. The Octagon is made to AS1638 using premium heat treated T6 alloy, and comes with a 5 year warranty.

Choosing tyres is one of the most important decisions you can make for your 4WD. Pick the wrong ones, and you could find yourself dealing with years of excessive noise, poor safety, poor performance and punctures. Making the decision even harder is the fact that some tyres which perform well on one type of vehicle, can be terrible on another. So what to choose for the 200?

Over the years I've used numerous different 4WD tyres over close to a million kilometres of Australian terrain, from long distance highway cruising to outback dust, sand, mud and everything in between. I've had the OE Dunlop Grandtreks as fitted to my 105 and 200-series 'Cruisers, plus various Bridgestone, Olympic, Toyo and BF Goodrich All-Terrain type tyres, plus several sets of BF Goodrich Mud-Terrains and also some Kumho muddies. All had their pros and cons, and I also suffered several major carcass failures.

What I've learned is that every tyre choice is one of compromise. Striking a balance between performance under different terrains, plus wear rates and durability. At one end of the spectrum you have extreme offroad tyres such as the Mickey Thompson Claw, which are designed for ultimate offroad performance, but aren't ideal for extensive highway travel. Near the other end of the spectrum are tyres such as the Cooper Zeon, which are designed for 4WDs that rarely leave the bitumen.

In between these two extremes lies a huge range of "All Terrain" tyres, with varying degrees of bias between road and offroad use. For a touring build like my 200, you need excellent strength and durability and above average offroad capability, while still retaining good highway performance. Low noise and reasonable wear rates are also factors worth having.

It was a close call, but I decided that the Mickey Thompson Baja ATZP3 was the tyre for the build. It's a relatively new tyre, having been released in 2013, but is already earning rave reviews. It fits into what I'd describe as the "aggressive all-terrain" category, along with tyres like the Cooper S/TMaxx.

The other big tyre decision is sizing. The GX/GXL 200 series is shod with 285/65R17 tyres (The VX and Sahara wear 285/60R18), giving an overall diameter of around 802mm (31.5") for all models. To improve clearance and offroad ability, I've gone for a slightly larger tyre, the 285/70R17 with an overall diameter of 838mm. This roughly equates to a 33x11.5" tyre in the old sizing system. Note that in some states, even this relatively small increase will require engineering approval, but with the release in 2013 of Revision 3 of VSI6, in NSW and some other states it's now permissible to increase tyre diameter by up to 7% (up to to 858mm) without engineering approval.

It's one thing to look at the specs of a tyre and assume how it will perform in the real world, but the true test comes once you've fitted the tyres to the vehicle. In the case of the P3s, I have been pleasantly surprised. They've exceeded my expectations.

On-road, the P3s perform better than any mud or all-terrain tyre I've ever owned. In both wet and dry conditions they provide higher levels of grip than even the original road-oriented Dunlop Grandtreks, let alone other all-terrain or mud-terrain tyres. Very impressive. The only real downside are the road noise levels, which are are noticeably higher than the OE tyres, although still well below what you'd get from a mud-terrain.

For general offroad work in rocks and loose dirt, they perform better than a typical all-terrain, with the square lugs on the edge of the tyres providing good levels of traction. On sand, with pressures down to around 130kPa (19psi), the large, flat centre tread blocks give the P3s good flotation and they don't dig in and bog like a more aggressive tyre would. In mud, the P3s again perform surprisingly well for an all-terrain design. The tread blocks are well spaced enough that they don't clog up easily, and traction is further aided by the sidewall lugs ('Sidebiters' in Mickey Thompson lingo).

So far the P3's certainly tick all the boxes for my ideal tyre choice. They provide good levels of traction, a high load rating and haven't shown any signs of damage or durability issues. Only time will tell how well they wear, and I'll be providing updates as to their long-term wear and durability.

Update 2015:  Check the progress update page for details on how everything performed on our first big outback trip.

Update 2019:  When it came time to replace the P3s, I decided to try something different. Read the update here.